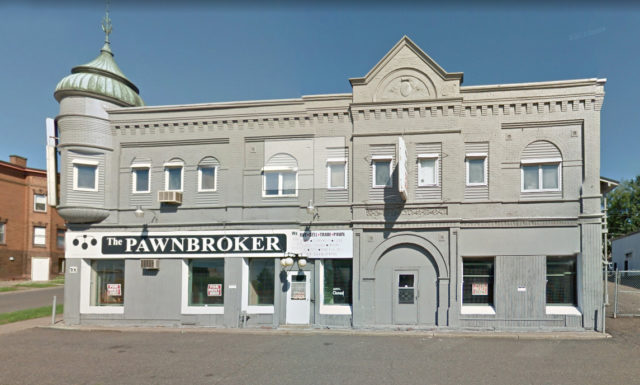 This brick two-story Romanesque Revival store and flats building was constructed in 1889/1892 by builder John Grandy for Hooper Kohagen. Henry Halkman was a long-time store owner at the prominent location on 4th Street’s streetcar line. No architect is listed in the city building permits. The building is distinguished by a wide arched entrance opening at the first story, a prominent round corner turret with decorative finial, arched window openings at the second story, and a gabled roof parapet with decorative panel marking the entrance bay. The building was listed in the 1984 survey and included in the Group II category, defined as a generally important site or structure that contributes significantly to the visual and cultural heritage of Duluth, and qualifies for listing in the NRHP. Since then the ground story storefronts have been modified, the brick has been painted, and the window sash and doors have been replaced. While these changes have affected the building’s integrity, none are irreversible. With appropriate rehabilitation, the building may meet National Register eligibility Criterion A for its association with broad patterns of history in the area of commerce and/or Criterion C for embodying the distinctive characteristics of a type, period, or method of construction. The building would meet criteria for local designation under Criterion D because “it embodies a distinguishing characteristic of an architectural type” and under Criterion G as “its unique location or singular physical characteristics represent an established and familiar visual feature of a neighborhood.”

Here are some pictures of the Henry Halkman Store and Flats at 701-705 East Fourth Street. The old black and white photos were found in Duluth’s Legacy book on Architecture Volume 1 from 1974. This building was torn down yesterday, July 24, 2017.